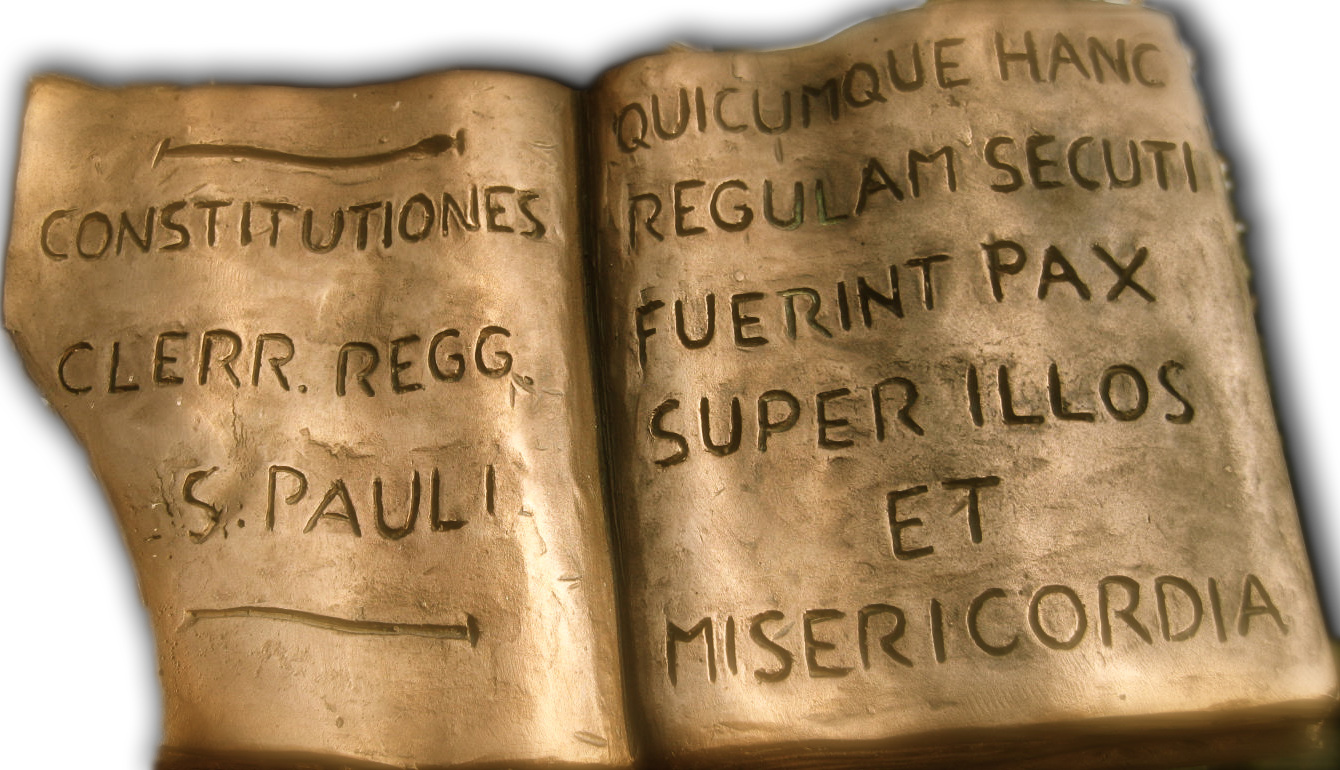 Introduction to the Writings of St. Anthony Mary Zaccaria

3. WRITINGS
There are few extant writings of St. Anthony Mary Zaccaria: a few letters, a few sermons, and a little more than an outline of13  the order’s Constitutions. In addition, some other writings are ascribed to him. Notably, on top of each handwritten page, Anthony Mary penned an invocation. Usually, it was the monogram “IC XC+,” the initial and last letters of IHSOYC XRISTOC, Greek for Jesus Christ, a graphic symbol from Byzantine tradition. The additional cross means CRUCIFIED. At the head of the Sermons, we find two other symbols. One is “yhs Maria +,” where yhs is the traditional Jesus monogram, first popularized by St. Bernardine of Siena and later adopted by St. Ignatius of Loyola. The other reads “Jesus + Maria.” Moreover, the Constitutions end with “Deo Gratias Jesu Mariae” (Let us give thanks to God, Jesus and Mary). All these invocations reveal Anthony Mary’s devotion to Jesus Crucified and to the Virgin Mary.
3.1 LETTERS
We have eleven letters authored by Anthony Mary. Four are original manuscripts: Letter II (addressed to Bartolomeo Ferrari and Giacomo Antonio Morigia, January 4, 1531); Letter IV (to Giovan Giacomo Piccinini, January 16, 1534); Letter VI (to Ferrari, October 8, 1538); and Letter VII (to Battista Soresina, November 3, 1538). Of the other seven, we have only copies, though they are very early. Three letters are cosigned by Anthony Mary and Angelic Paola Antonia Negri. They are, Letter VI, Letter VII, and Letter VIII. In addition, there is a twelfth letter: though it bears only Negri’s signature, it was without a doubt penned by Anthony Mary. In fact, the original manuscript of this letter is in Anthony Mary’s own handwriting.
One letter is addressed to Fra Battista da Crema (Letter I); two are addressed to the Angelics (Letter V and Letter IX); three to laymen (Letter III, Letter IV, and Letter XI); and four to the Barnabites (Letter II, Letter VII, Letter VIII, and Letter X). One (Letter VI) is addressed to Bartolomeo Ferrari, but it is meant for both Barnabites and Angelics who were doing missionary work in Vicenza.
The eleven letters cover a nine-year period, 1530 to 1539. However, there are gaps between 1531 and 1534, and between 1534 and 1537. Letter IX and Letter XII are undated. The last three letters, a remarkable total of 2,200 words penned in the brief space of ten busy days, were addressed to an Angelic, a Barnabite, and a Married Couple. Written respectively on June 10, 11, and 20, 1539, that is, within less than a month of his death, these letters unwittingly became, as it were, his final testament to the three families of his foundation. Anthony Mary’s letters do not belong to any literary genre nor can they be styled “spiritual letters” per se. They were occasional writings dashed off without any concern for style, in plain, totally unadorned language. However, they do contain a wealth of extraordinary spirituality, a fact easily recognized by his earliest biographers.
Anthony Mary himself, in his last letter, pointedly remarked: “I have not written one word  without some special meaning in it. If you discover it, it will be, I think, most useful and gainful for you.”13
3.2 SERMONS
The manuscript codex of the Sermons is kept in the General Archives of the Barnabites in Rome. It was entrusted by Anthony Mary’s mother to the Angelics of Santa Marta Convent in  Cremona. Early Barnabite historian, Father Giovanni Antonio Gabuzio, retrieved it during his stay in that city from 1584 to 1595. It is an index-notebook. When he was a student at the University of Padua, Anthony Mary recorded in it some lines of the philosopher, Averroës. Later on, as a priest in Cremona, he wrote in it the talks on the Ten Commandments, which he gave at the Amicizia Oratory in St. Vitalis church. Clearly, he planned to write out ten sermons, one on each commandment. However, the notebook contains only five sermons: four on the first four commandments. The fifth one is on the commandment, but it is only half finished. Sermon I has an appendix on how nuns should practice the first commandment. Maybe it was intended for the Augustinian Community of Santa Maria Annunziata in Cremona.
A sixth sermon was part of a projected trilogy on moral and spiritual lukewarmness. The Sermons are addressed to noble laymen, who were married and had children, and were active members of the Amicizia Oratory, in the years 1529-1530 when Anthony Mary was a priest; however, their content is applicable to everyone. The above-mentioned appendix to Sermon I proves it. All the Sermons have the same structure. They are divided in two parts. The first one treats of a specific theme. In Sermon I it is the “due order” of the spiritual life; in Sermon II, “true spiritual life”; in Sermon III, “acknowledgment”; in Sermon IV, love; in Sermon V, passions; in Sermon VI, the “way of God.” The second part of Sermons 1–V is an extensive exposition of each commandment and its practice. In the case of Sermon VI, the second part is a detailed explanation of lukewarmness. The Sermons exhibit a more elaborate style than that of the Letters. The language, though direct, reveals greater care and elegance. The reasoning is cogently logical and is structured on solid theological preparation. The numerous Biblical quotations
reveal a mastery of the Scriptures.
Recently, a hypothesis was put forth, according to which the Sermons are not liturgical homilies, but opening talks given at the Amicizia Oratory meetings, where all present could then speak. It is noteworthy that Anthony Mary reserves the term “sermon” only to his talk on lukewarmness.
3.3 CONSTITUTIONS
We have no original manuscript of the Constitutions. We only have a very early copy. The Constitutions is no more than an extended outline. It was never approved nor promulgated, hence, it was never binding. In all probability, it is a reworked translation of a previous Latin outline by Fra Battista, the so-called “Primitive Constitutions.” It was a basic text worked on by the first Fathers toward a definitive text. 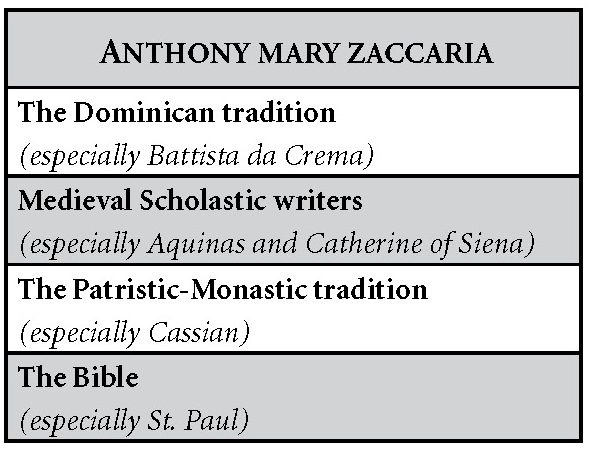 Rather than being a product of humanistic time, Anthony Mary belongs by right to the whole Catholic tradition. He did not represent a break in the Church but a continuity. He was a reformer within the Church tradition, not a revolutionary.
Humanists and Protestant reformers claimed “to return to the origins,” but instead they created a discontinuity in the Church Tradition and subverted its very nature. 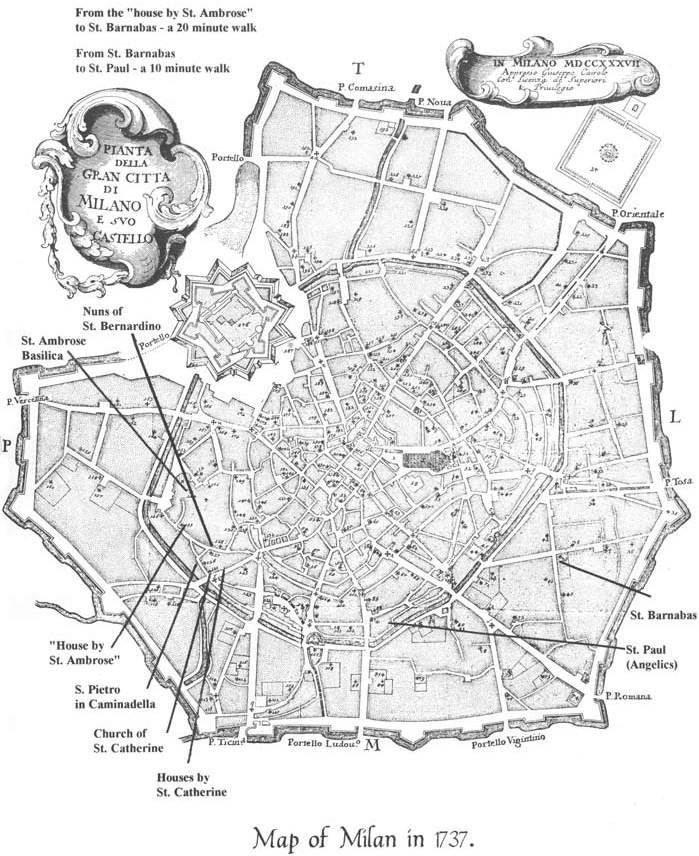