THE ESTABLISHMENT OF THE BARNABITES IN INDIA

In our history the cities of Madras (today Chennay) e Pondichery, on the East coast of India, are well known. Our missionaries who were longing to reach the Barnabite mission in the kingdoms of Ava and Pegù in Burma (today Myahmar), used them as transition ports and also as apostolic ecclesiastical reference.

Today the Barnabites have set foot on the land of the fabulous India arriving not by sea but by air, in Bangalore, set at center South of the nation, about 200 km from Chennay. During these last years two vocations have enriched our Congregation, both of them coming from the State of South Kerala in India, Father Winson Paul Menachery and Father Varghese Kalambattukudy. Meantime, a number of young men have been asking for admission to our Congregation. Fr. Giovanni Scalese, while he was Assistant General kept contact with them, and made two visits to the country, the first trip with Fr. Winson and the second last year with Fr. Varghese on the occasion of his First Mass at home. In his report to the General Chapter Fr. Scalese explained the immediate need to open a house in India.

Assigned to the Philippines, after the General Chapter, with the approval of the General Council, he reached the agreement to open the foundation taking turn every six months due to the six months rule about the visa by the Indian government.

Proper contact was made with the Sisters Daughters of Divine Providence, who are were established in Bangalore. Both the Mother General and the local Regional Superior have shown enthusiasm at the idea to have us with them. Therefore, having making contact with Sister Alphonsa Manickathan, and having taken an appointment with the Archbishop of Bangalore, a Barnabite priest left Manila for Bangalore, via Singapore, on February 25, 2007.

During his one week stay with the Daughters of Divine Providence, Father was able to visit the area looking for a residence, possible schools for our seminarians, local religious communities, and, first of all, on Tuesday, February 27, he paid the visit to Archbishop Dr. Bernard Moras, accompanied by Sr. Alphonsa. The Prelate was very cordial but resolute: he would welcome us in the diocese only if we would set our house outside the city area, unless we would open at the same time a mission in one of the most remote areas of the archdiocese.

Not able to open a mission, the Sisters suggested to visit the area in Koskote, on the main road to Chennay, since in the area there is the KRISTU JYOTI COLLEGE for philosophy and theology, run by the Salesian Fathers. Father visited the Sisters of Fatima, and the Superior suggested to visit the Piarist Fathers who have just inaugurated their new seminary, not far from the College, and perhaps they might have room for us. Very kindly the Sisters accompanied Father to visit the College, and there he met one of the Piarist seminarians who accompanies Father to their house. There, he was welcomed by their Superior, Fr. Fernando Negro. Father asked him about any possibility of staying with them as guest for a couple of years! Father jumps with joy at the idea, and shows him immediately a section of the house which could be used by the Barnabites. Naturally he will have to check with his provincial superior in Argentina. As the Sisters would say, for sure Divine Providence was looking over us!

Back to Manila on March 3, Father sent a detail report on his visit to Fr. General, who, with a letter of March 9, 2007, with the consent of his Council, decided to launch the foundation as soon as possible.

There was the problem of the visa, but, having asked information from other Congregations, the Barnabites discovered that India has a special treatment for USA citizens, that is, they can have also a ten year Visa with multiple entry, although every six months one must go out of the Country, but would be able to return the same day. Since one of the Fathers does have the American passport, he immediately applied for the Visa to the consular office of India in New York City, by mail, and the ten-year visa has been granted him immediately. This has eliminated the need for the two Fathers to alternate every six months.

Having received news from Fr. Fernando that his Provincial Superior in Argentina had approved the idea to have us as guest in their seminary, the designated Father rights away set his departure for Monday, May 21, 2007, while Fr. Scalese informed all the possible candidates who were in contact with him that they were welcomed to join the Barnabites at the PIARIST FATHERS FORMATION HOUSE, Nazareth Bhavan, Sy. 56 Kittakannur Village, K.R. PURAM P.O., BANGALORE 56036, at to report at this address the week of May 28. Four of them gave a positive response.

Sunday, May 21, 2007, the Barnabite Father left definitely the Philippines to start the new foundation of the Barnabite Congregation in Bangalore, India, as declared by the Superior General, Fr. Giovanni Villa, in his letter of May 4, 2007. The earliest records of a place named ‘Bengalooru’ were found in a 9th century temple in an area that is now known as ‘Old Bangalore’. Once the feudal lord Kempe Gowda was hunting in this area, a rabbit turned and attacked his dog. This made a great impression on the lord and he gave the place a title of Randu bhoomi (the place of heroes) and in 1537, with the assistance of the local king, he constructed three districts protected by a walled fort on the site.

During the next three centuries, Bangalore existed very much in the shadow of its neighboring city Mysore, and control of the town changed hands many times. The year 1831 marked a major turning point for the city. Claiming misrule by the king Krishna Raja Wodeyar III, the British took control of the Mysore Kingdom and, possibly influenced by the city’s mild climate, moved the administrative capital to Bangalore. New telecommunication systems were laid, rail connections built, fine government buildings constructed and the city’s famous parks and gardens established. After independence, Bangalore maintained its position as the Karnataka state capital, and continues to flourish.

For many years, Bangalore was known throughout India as the most green, liberal and forward thinking city. In recent years, these attributes have propelled Bangalore to the forefront of the high-tech industry boom in India, and it currently ranks as India’s most developed city and one of the world’s fastest growing urban areas.

The name Bangalore appears to come from an Anglicization of the native name “Bengalooru” an adaptation of the earlier name in Kannada: Benda Kaal Ooru (The Town of Boiled Beans). Apparently this rather humble name was bequeathed to the city by king Vira Ballala. Once while lost in the area, he was offered boiled beans by an old woman, and it was out of gratitude that he named the area after this simple offering.

The Barnabites hope that the fast growing development of the city will be the path of the growth of their Congregation.

The candidates for now are four: Benny Pachanal and Jackson Kattamkottil from South Kerala, Maria Joseph Ahilan and Lawrence Siluvai from Tamil Nadu. All four will be enrolled at the KRISTU JYOTI COLLEGE, Jackson e Lawrence for the first year in theology, while Benny and Maria Joseph, having already finished theology, will take the two years Master Degree in Theology for Youth Ministry.

In a couple of months Fr. Varghese will reach the place as well to work for the formation of these candidates, the selection of new candidates who are already knocking at the doors, and the development of a Barnabite presence searching for a property on which to build a residence. For now the Barnabites are guests of the Piarist Fathers who have welcomed them as through brothers, allowing them to share fully in the life of their community. To them, the Barnabites owe grateful appreciation and thanks.

Up to now everything has been developing so smoothly that indeed in the words of the Daughters of Divine Providence “Divine Providence is at work.” Indeed, the Barnabites would like to entrust their new foundation into the maternal hands of OUR LADY, MOTHER OF DIVINE PROVIDENCE, with the protection of their Holy Founder St. Anthony M. Zaccaria and all their Saints.

The Presbyteral Ordination ceremony of  the Indian Barnabite Fathers:

Let the Building Begin of the First Barnabite Seminary:

Today on March 9, 2013 work began with the removal of the eucalyptus trees.
The trees are cut down and the roots grubbed up and everything was sold.
May God bless the work of our hands!

more pictures of the construction >>>>> 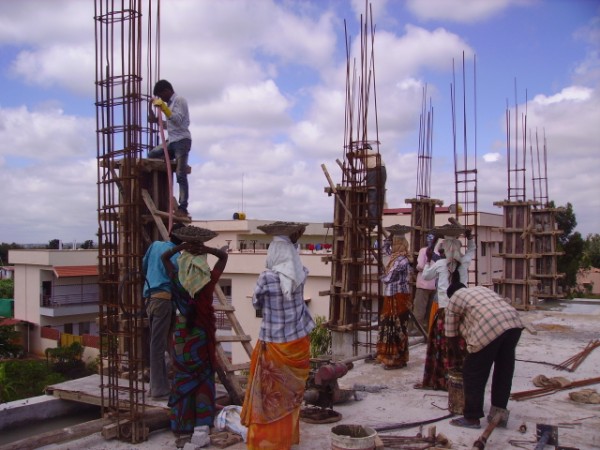