"...the spiritual life demands that you never turn back or stop going forward; but rather that, as soon as you taste it, you make progress day by day and, forgetting what lies behind, strain forward to what lies ahead"                           Anthony Mary Zaccaria, Sermon II

On September 11,1994, I was in Monza, Italy, kneeling before Father Luigi Villa, Superior General of the Barnabite Fathers and a crowded church. I was a bit nervous as I read my profession, promising to dedicate my life to God and his people as a Barnabite, living poor, chaste and obedient. As I read, my mind flashed through the various steps that had brought me to that point.

It had all started in 1987, I was a college senior at Lehigh University, studying Electrical Engineering. Throughout my time in college I had become increasingly aware that maybe God wanted something different for me than the plans I had prepared. I was in AFROTC scheduled to be commissioned a Second Lieutenant in the Air Force the day before my graduation. I loved the Air Force, and I loved engineering as well. But more and more I had, noticed that I was enjoying my role as a Small Group Bible Study Leader for the Inter-Varsity Christian Fellowship. I began thinking that perhaps God wanted me to serve him full time.

As a result of a missions trip to Haiti with the Fellowship group, I became ever more convinced of this idea. So I started writing letters to various religious orders. One day a priest called me on the phone to invite me to lunch. He explained that my letter had been sent to him because his order had a house near the University. We got to know each other a bit and agreed to continue meeting. He tried to explain to me about the Barnabite ideals of a Cross and Eucharistic centered spirituality; but what really attracted me to them was the attempt of the community to really live for the Lord Jesus and for each other. They seemed to be really striving for continued personal conversion that spilled over into their work in the parishes and as high school teachers.

After spending a week with them while still a Lehigh student, I asked to be admitted into the order. At the same time I asked to be released from my Air Force ROTC obligation. While I was waiting for a response from Uncle Sam, the Barnabites accepted my application and I started seminary, living at the Barnabite community in Bethlehem, PA.

Sadly, I had to leave after just one semester to serve my Air Force time. So I packed my bags and headed for Wright-Patterson Air Force Base, Ohio.

As a new lieutenant I was assigned to the Maverick Missile Program Office where I used my engineering background to buy support equipment for the Maverick. It was great. I was a program manager doing some technical work and got to travel a bit as well. I really liked my co-workers and the Air Force life. We had a super parish on base too, and I didn't hesitate to get involved in parish RENEW group and outreach programs. While I remained happy with my work and had a good group of friends, my parish activities, continued prayer and spiritual direction, along with occasional visits to the Barnabites back in Bethlehem convinced me that God was calling me to wait for the opportunity to return to the seminary.

Not that I didn't have doubts at times. In fact living really on my own with a decent salary and a good job really laid out the options for me. I thought hard about giving up the seminary idea in favor of an Air Force career and a family, but in the end almost unexplainably there was that desire to return.

So when the Air Force offered me an Early Out Program in the spring of 1992, I jumped at it, leaving six months early and arriving in Youngstown, NY (near Niagara Falls) just in time to reenter seminary.

After a year in New York the Barnabites asked me to go to Monza, Italy for my novitiate where I continued to learn about our congregation

and to confirm my belief in a Barnabite vocation. During that year I decided definitely to put aside the Air Force and other career ideas and while I didn't yet make my solemn and permanent profession I continued to be convinced of the correctness of the path I had chosen..

From Monza I was sent to Rome to continue to work on my seminary training. In Rome I lived with 24 other young men from all over the world who were also studying to become Barnabite priests.

On June 24, 2000 I was finally ordained a Barnabite priest by Bishop Henry J. Mansell of Buffalo at Our Lady of Fatima National Shrine-Basilica in Lewiston, N.Y.  Sonce that time I have been stationed at Our Lady of Fatima Shrine.  I am always impressed by the variety of ways the Lord uses the Shrine to bring healing and reconciliation to his people

If you have any questions or just would like to chat about the Barnabites feel free to write to me. My address is:

My EMAIL address is:
pmccrsp@fatimashrine.com 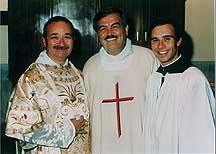 Hi! I'm Father Richard M. Delzingaro, a Barnabite priest. I was ordained a priest on April 12, 1996, at the respectable age of 56.

Why? And why so late in my life?

I won't blame you if you find yourself thinking, "This guy probably failed in life and very conveniently has decided to live the easy life of a priest!"   Believe me, the truth is quite different.
I had a very good and well paid job as an English teacher at the Council Rock High School in Newtown, Bucks County, Pennsylvania.

Was I fed up with school and kids? Was I tired of being in a classroom day after day? Not at all. I really loved teaching. And even now, once in a while, I miss the classroom.

By the way...here are some pictures of me some thirty years ago.

In 1968 I was named "teacher of the year." This recognition was a great honor.

So, why did I enter religious life as a second career-vocation?

I cannot fully explain it, but at a certain point in my life I felt the mysterious call of God to leave everything - my comfortable and fulfilling life as a teacher - and to give myself totally in service to Him and His people.

After a long period of discernment I finally decided to take that leap forward and asked to be accepted into the Barnabite Order.

Even today I'm not sure why the Barnabites and I connected. But the vocational catch-phrase of the North American Province, "The light of Christ, the lightning of Paul" attracted me to the openended apostolate of the Order. Barnabite spirituality, animated by the vision of our founder, offers freedom and encouragement to find the way to God and in the spirit of the Apostle Paul to bring others to God through service in Christ. I came to the realization at my solemn profession that the call to the Barnabites was to me but not for me - and that the call was to serve others.

Here are some pictures of my ordination to the priesthood and my Mass of thanksgiving at Our Lady of Fatima National Shrine-Basilica in Lewiston, N.Y. 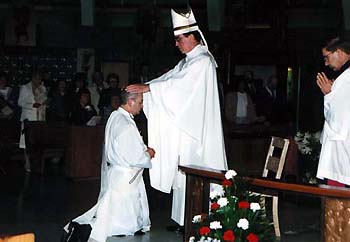 Fr. Richard Delzingaro is ordained a priest by Bishop Henry Mansell of Buffalo 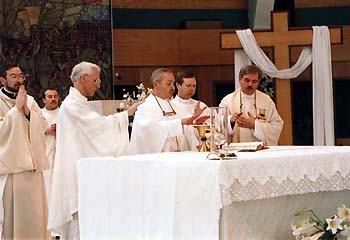 Fr. Richard celebrates his First Mass at Our Lady of Fatima Shrine

If you are interested in Religious Life - especially as a Barnabite Priest or Brother - and you want to know more about our Order and Spirituality, tour our Web Site. Read about our Formation Program. Write to the community closest to you either here in our North American Province or elsewhere.

You may also write to me personally at
Basilica of the National Shrine of Our Lady of Fatima
1023 Swann Road - P.O. Box 167
Youngstown, New York 14174-0167
Or send an e-mail inquiry to: BarnabitesUSA@fatimashrine.com